CRHT Home CRHT Location CRHT About Us Why? Links/Archive 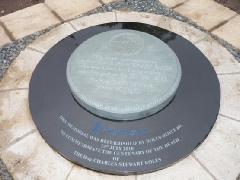 The memorial plaque, shown left, is out of public view in the private grounds of St Peter's School and with the goodwill of the Headteacher an annual commemoration, open to the public, is held at the memorial plaque.  The original circular plaque, in grey, was created in 1987 and in 2010 was refurbished by Rolls-Royce plc, the aero engine company, with the addition of a black granite base to commemorate the centenary of the fatal crash.

Statues exist in Monmouth, near the Rolls' family home, and Dover from where he set off for his return flight across the Channel.

During Bournemouth's bi-centenary in 2010, and in coordination with

The organisation activities are to:

1. To hold a commemoration annually on the Saturday closest  to 12th July.

(You Tube video and book produced in lieu of 2020 Commemoration)

2. Create an archive of information and to set up a web site.

3. Work with local organisations, to design, locate and purchase

awareness of the local history and importance of the site. 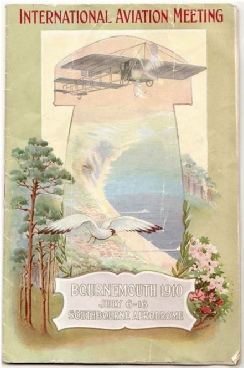 Under our Associate Membership scheme you will receive a news letter covering articles about Rolls and the Aviation Meeting, advance information about events such as the annual commemoration and the knowledge you are contributing to the annual maintenance of a future heritage project. Priority will be given to members who would like a speaker for their community group. For application form click here